This is due to a surge in motor vehicle crime including theft from vehicles and theft of vehicles in Bush Hill Park Ward.

It is clear that based on the figures, that there is a significant under reporting of vehicle crime currently. This makes the job of the Police harder, in terms of tracking trends, activity and descriptions of the criminals.

The Police are utilising the security camera footage supplied by residents to help indentify the culprits when they are on patrol. Thank you to everyone who has submitted the footage.

In addition the Police are deploying additional resources to the peak times that these crimes are occurring.

Some motor vehicle crime is preventable – please always ensure your car is locked and valuables are not on view/left in the car.

Together we can reduce crime in Bush Hill Park Ward, but only by working together.

Does it feel like the situation could get heated or violent very soon? Is someone in immediate danger? Do you need support right away? If so, please call 999 instead 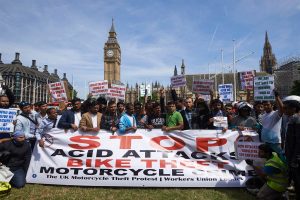 London, especially, has been hit hard by the scourge of acid attacks. Reported figures show a 74% rise in attacks year on year. A third of the attacks last year happened in the borough of Newnham.

One of the key challenges has been the ease of acquiring these dangerous substances over the counter – often with no questions asked.

The Police have expressed a concern that it is becoming the preferred weapon of choice for robbery gangs. Presumably due to carrying a knife bringing a mandatory sentence – whereas carrying acid does not.

Already leaders in the retail sector have taken action. Stores including B&Q and Homebase have stopped selling sulphuric acid products and the British Retail Consortium support the most toxic products only being available on licence.

This is in addition to the Home Office carrying out an urgent review. Covering whether the CPS needs to change guidance so that corrosive substances are included in the classification for dangerous weapons. Legislative change could come through the Poisons Act 1972 to cover corrosive substances.

Current legislation gives guidance to shops that sulphuric acid is listed as a ‘reportable substance’. This means that whilst a licence is not required for purchase, under the guidance ‘suspicious transactions’ must be reported. However many products do not list the concentration of acid which separates ‘reportable’ products to conventional products like bleaches. This has led to confusion and retailers adopting differing approaches.

Changes to tackle these awful attacks should include;

(1) Sentences for carrying corrosive substances without a lawful excuse as currently covered within knife crime sentencing (up to four-years).

(2) Legislative and CPS guidance changes to ensure that attacks with acid are covered as dangerous weapons.

(4) Purchases will be to over 18 year olds only, requiring proof of age identification; coupled with credit card only transactions – so purchases can be traced if needed.

(5) Manufacturers being required to clearly label corrosive products and the level of sulphuric acid contained.

(7) Mandatory life sentences on those convicted of grievous bodily harm with intent.

Only clear and bold action can tackle this awful and heinous crime that is affecting the country and London especially.

Clearly recent times have been a very difficult for the Waterbeach community given the number of burglaries that have taken place. What we have experienced would be a lot for a year, let alone the past month.

The crime statistics for the last rolling month (09/11-09/12) for Waterbeach are as follows:

To this end I have been in regular touch with the Police.

Today I have spoken to Inspector James Sutherland, Safer Neighbourhood Manager for South Cambridgeshire Police. From this discussion the following was agreed;

(1) An increased visibility of Policing in the village this week going forward.
(2) More community updates via E-Cops.
(3) Police giving more support to the Neighbourhood Watch as needed.

There will be soon a division wide ‘Operation Oakland’ being launched with the key focus of reducing burglary and vehicle crime. I have asked that Waterbeach is one of the first villages to receive this support.

I hope this news is of help.