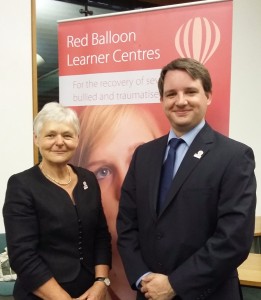 There are at least 16,000 children between the ages of 11 and 15 missing education in England because they have been severely bullied. They deserve justice. James is pictured with Dr Carrie Herbert MBE, Founder and President of the Red Balloon Learner Centre Group. Already the campaign has drawn widespread praise and was featured on the influential blog page ‘Conservative Home’. A much more detailed article can be found; www.jameshockney.com/my-charter-for-bullied-school-children/

Making these changes would go a long way towards helping and supporting the victims of bullying.

We all know that crime in too high in the area. James fully supports the recruitment across the UK of 20,000 extra Police Officers. This will mean more Police for the Enfield and Haringey BCU. 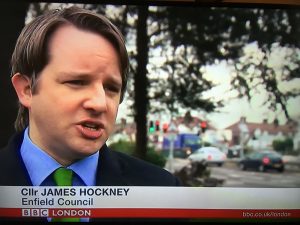 James has been a staunch advocate of getting action on the speed racing that has taken place on the A10.

This has included bringing forward a debate with the Conservative Group Leader at Enfield Council (Opposition Priority Business), being interviewed by BBC London News and launching a Change.org petition.

His action with the community has helped secure the Traffic Police ‘Operation Vision Zero’ and roll-out average speed cameras on the A10, but TfL only covered the northern Borough section. James is pressing for all the A10 to be covered as was expected.

Back off our bins!

James has been at the forefront of fighting the Labour Enfield Borough Council’s proposed cutting of bins collections.

This has included featuring this as a major issue in his Bush Hill Park by-election campaign, pressing the issue on social media and speaking in Enfield Borough Full Council meetings. 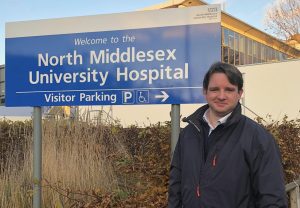 His family have been served by the North Middlesex Hospital for decades – so deeply values the professionalism and dedication of our NHS staff. So will always support record investment going into the NHS.

Many residents have contacted James about the awful amount of fly tipping that is blighting our area at the moment. He continue to work with residents and holding the Labour run Council to account on tackling this. 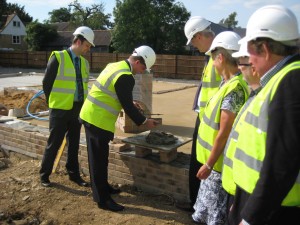 James campaigns for what is known as ‘local connection housing’. This includes having written about the issue on the ‘Conservative Home’ website and serving on the board of a social housing provider.

Schemes like this mean those on the Council Housing waiting list that have a local connection are pushed to the front of the queue.