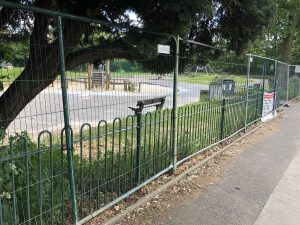 During lock down playgrounds are shut.

However, unfortunately some adults have ignored this. To this end I contacted Enfield Council about what was happening at the playground.

In response the Council has secured the Bury Lodge playground site by installing tall metal fencing.

Moving on after an amazing 15 years as councillor

January 9, 2016 James Hockney Family Comments Off on Moving on after an amazing 15 years as councillor

After an amazing 15 years as a councillor, due to moving to London with my family, coupled with already working and studying in London I cannot re-stand in May 2016 for District Councillor in Waterbeach Ward. I will continue to give committed representation to the Ward over the next four months and support the search for a new Conservative candidate.

As I said this has been a very difficult decision as being a Councillor has been part of my life for over 15 years. In this time working with the community we have made a significant difference on many local issues – and we can look back on some real achievements. I am grateful to everyone I have worked with –councillors, MP’s, MEP’s, council officers, residents and activists. This has always been about team work and securing the best outcomes for the local community.

My intention is to remain active in Conservative politics including campaigning in the London Mayoral and Cambridgeshire elections, continuing as a Conservative Friends of Bangladesh Board Member and running the ‘Charter for Bullied School Children’.

I will always be grateful for the support I have had to allow me to be elected to three terms of office – thank you.

Supporting early years for our next generation

April 5, 2015 James Hockney Family Comments Off on Supporting early years for our next generation 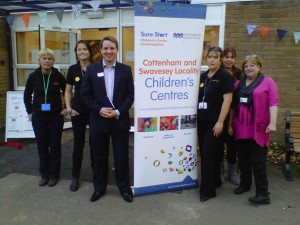 There is now a record number of families are using children’s centres. A study by the national charity, 4Children, shows that over a million families are benefiting from Children’s Centre services and that centres are supporting two-thirds of all disadvantaged families with children under the age of five.

Childcare places have increased since 2010. There are over 100,000 more places for parents to choose from than there were in 2010.

But also helping with the cost of childcare;

(3) Legislated for tax free childcare to support families, worth up to £2,000 per child.

(5) Universal Credit childcare support increased from 70 per cent to 85 per cent.

Pictured above is when I was delighted to attend the opening of the SureStart Centre in Waterbeach several years ago (known locally as the Dolphin Centre). Little did I know at the time that I would now be taking my wonderful baby daughter there!